If as the saying goes, “Less is More”, then debut single ‘Like I Used To’ from Irish singer/songwriter Killa Yan is certainly the most. The arrangement is pleasantly minimal while the melody is equally as delicate, allowing for the honest and vulnerable lyrics to dwell in the limelight, making it a piece which can resonate with mostly anyone.

The ultimate way to embark upon what one can only assume will be a considerably fruitful musical future for the artist, if all continues as it has started.

For any music lover, finding a strong connection with a song upon first listen is sometimes very rare but, nevertheless, a wonderful thing. This, however, was very much the case upon my first listen of ‘Cryptic Love’.

A soulful piece with a delightfully gentle hint of funk, Iyamah’s debut single touches on the increasingly popular topic of the empowerment of women which is executed in a way that is more tasteful and elegant, than irrational or ambiguous.

If you’re a fan of infectious soulful rhythm and blues then look no further; Dan Caplen is bringing Christmas 2018 10 months early! The young singer/songwriter has had a rewarding introduction to the music world by collaborating with well-renowned names like Macklemore, RAY BLK and Jess Glynne.

‘Two Fingers’ is the perfect song to bridge between the glum and gloomy winter days to the highly anticipated spring months where road trips and the best music are once again upon us.

The lyrics “It’s your love I’m lost in” thoroughly sums up Scotland hot topic Lewis Capaldi’s debut single ‘Bruises’. Hypnotic, powerful, heartfelt, emotional and sincere, Capaldi serves up everything you could ever want in a conflicted battle of a ballad.

With many reputable collaborations under his belt, 2018 is said, by many, to be the year to watch this artist rise to stardom.

Another one for any of you which may be looking for a rising star, or a star-to-be for that matter, Declan J Donovan’s 2017 release ‘Better’ is exactly what you’ve been waiting for.

The essential remedy for those loathsome, figurative rainy days, Donovan’s compelling and distinctive voice is instantly soothing, while the song’s minimal structure is just as appeasing. So, next time you’re in need of some well deserved recovery, put on my February favourites playlist, pour yourself a glass of wine (or ten), and get lost in the music.

For fans of: Will Heard, Sipprell, James Vickery

Potentially one of my favourite artists of 2017, Sam Wills’ entire So Bright EP (2016) is inevitably a must-listen collective if you’re a fan of electronic soul, or even if you’re simply looking for something slightly unique with ‘pop-esque’ elements.

Single ‘So Bright’ is a pleasing mixture of repressed layers and captivating choruses which makes for an extremely infectious result, the addition of soulful synths only doubles the song’s genius.

Following on from the very ‘soul’ ridden pattern forming in my current favourites, ‘Afraid’ by American R’n’B artist Xavier Omar is a delicate track, overflowing with a vulnerability and uncertainty that is quite compelling as it is so relatable.

In this 2017 single, Omar showcases his fantastic vocal range, varying from a low and moody vocal to hinting ever so slightly at a rather satisfying falsetto as the song progresses. This variety only helps the meaning of the lyrics to be even more enticing and believable.

Sinead Harnett – If You Let Me

With her best selling single ‘If You Let Me’, Sinead Harnett has embodied the essence of romantic conflict that can relate to almost anyone. That feeling of conflict between ‘letting go or letting them in’ is pictured very realistically within her lyrics, so convincingly that if you closed your eyes, you can most certainly feel the dispute firsthand.

My favourite thing about Press To MECO is the clear efforts put in to do one thing only; create quality music for people to enjoy. Being within a genre in which bands are all too but ready to expose themselves to a mainstream audience rather than focus on what really matters can mean sticking out like a sore thumb, but for PTM it is doing many favours.

Affinity, especially, is a musical masterpiece; glazed with the chunkiest of riffs and the most blissful harmonies, a perfect blend of anything and everything a rock fan could possible want. Truly, addictive content.

The ultimate duo are back and better than ever in Misch’s newest release ‘Water Baby’ which sets an extremely exciting tone for the highly anticipated debut album ‘Geography.

‘Water Baby’ is an ingeniously soulful piece with an old school touch that is riddled with nostalgia, no matter your age. I can only hope that this is not the last time Misch and Carner collaborate. 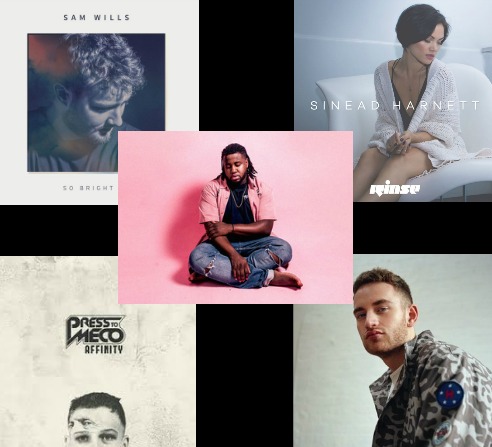 Since recently finishing a UK tour with Khalid, this young British singer/songwriter is causing quite the stir among pop and R’n’B fans.

Dawson provides an extremely relevant sound (an utter go-to for any Mabel fans) but despite appealing to a large crowd, care and attention has clearly been made to make her music distinguishable among what is quite a saturated genre. Newest single ‘Talk’ is quite typical of pop, however, previous single ‘Hush’ incorporates a muted Chainsmokers-esque electronic chorus, while ‘Still’ incorporates atmospheric layers, both of which are kept minimal so as to not take attention away from her incredible vocal abilities.

A certain musical icon of the coming years, Zak Abel’s debut album ‘Only When We’re Naked’ is bursting with addictive pop swagger and explosive choruses, perfect for the summertime (which is just around the corner… I certainly hope so).

With a number of credible collaborations already under his belt, including Tom Misch, Wretch 32 and Gorgon City, Abel is coming for you whether you like it or not, no matter what genre you like… and he is killing it.

For fans of: Chance The Rapper, BROCKHAMPTON, Childish Gambino

Frank Ocean is one of those MUST-listen artists that appear every once in a while, and are a true musical gem. While, like in society there are trendsetters and followers, the same goes in music and Ocean is truly in a league of his own, simply because he is not afraid to be himself or break boundaries that otherwise should not even be there.

‘Lost’ from Channel Orange is a particular favourite of mine, especially due to the moody and suppressed vocals which contrasts incredibly to the upbeat nature of the melody and chorus.

Want to get involved? Comment below your favourite tracks of February!